INEC disclosed this in a statement issued on Thursday evening.

The Commission also ordered all parties that have concluded governorship and state assembly elections to upload nominated candidates to INEC’s portal from 1st -15th July. 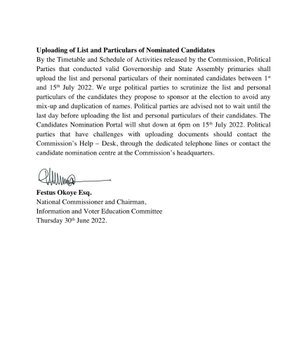 What INEC is saying

It said, following its meeting on Thursday, in which it discussed Voter Registration and issuance of Certified True Copies, “The Continuous Voter Registration will continue nationwide, and all Resident Electoral Commissioners and Electoral Officers have been directed to continue with the exercise pending further directives.”

It added that it has consistently reiterated its resolve to continue to provide electoral services to Nigerian people.

The Commission acknowledged the Federal High Court decision relating to the CVR, which they say they will give an update to the court.

On Certified True Copy Documents, INEC said political parties and all applicants of CTC documents will be treated expeditiously and will be issued soon, announcing that parties that have conducted valid Governorship and State Assembly primrose should upload the list and personal particulars of their monitored candidates between 1st and 15th July, 2022.

“Political parties are advised not to wait until the last day before uploading the list,” it urged.

What you should know